Skip to Main Content
It looks like you're using Internet Explorer 11 or older. This website works best with modern browsers such as the latest versions of Chrome, Firefox, Safari, and Edge. If you continue with this browser, you may see unexpected results.
Please leave us feedback about our services and how we can further support students at CSU Global!

In this section, you’ll find resources on choosing and narrowing a topic, developing and generating ideas, and organizing your ideas to help you get started on your assignment. 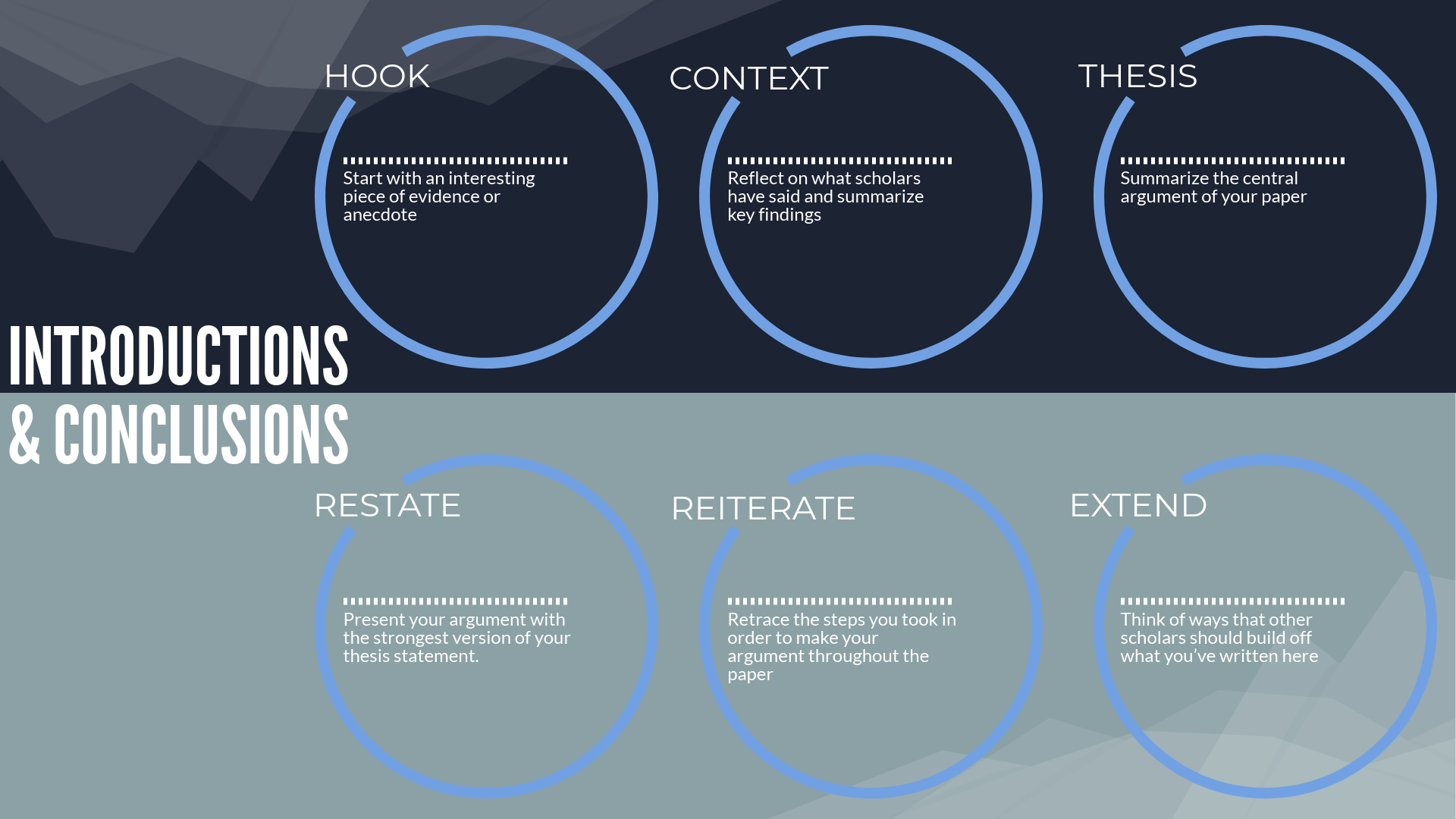 This resource explains how to structure paragraphs in order to support and develop an academic argument.

A strong body paragraph will begin with a topic sentence that also functions as a claim, or the main idea, of a paragraph. Claims must be argumentative and debatable by taking a stance on a specific topic or area of focus. Further, a claim typically introduces and defines the goal and focus of a given paragraph.

Evidence is essential for supporting an argument, especially in academic writing. Typically, the type and scope of your argument will dictate what evidence you should use, but regardless, each paragraph should present evidence in order to support the main idea. To help the reader distinguish between claims, evidence, and analysis, use a signal phrase (e.g., “According to the Environmental Protection Agency…”) to introduce source material. If you opt not to use a signal phrase, always be sure to cite evidence with a parenthetical citation.

After each piece of evidence, there should be analysis. Analysis should explain the significance of the evidence and show how it connects back to the claim for the paragraph. Because readers can interpret evidence in different ways, you as the writer can’t let the evidence speak for itself, no matter how strong the statistics or quotation. When analyzing evidence, it is your responsibility to explain how you interpret the evidence and to draw connections between the main idea and the evidence itself.

Although globalization has fostered severe tensions across the world, it still compels countries to choose the American way of life (M). In his article “Jihad vs. McWorld,” Barber (1992) uses the city of Marx-Engelsplatz in Russia as an example of globalization’s influence, describing it—and its statue of Karl Marx—as now surrounded by chain restaurants and ads for Coca-Cola (E). Despite the country’s Cold War past, Russia has succumbed to the influence of capitalism by welcoming in famous American corporations and their money (A). Even in countries once defined by socialism, globalization has enabled capitalism to win out (L).

Although globalization has fostered severe tensions across the world, it still compels countries to choose the American way of life. In “Jihad vs. McWorld,” Barber (1992) uses the Russian city of Marx-Engelsplatz as an example of globalization’s influence, describing it—and its statue of Karl Marx—as now surrounded by chain restaurants and ads for Coca-Cola. Despite the country’s Cold War past, Russia has succumbed to the influence of capitalism by welcoming in famous American corporations and their money. Similarly, Barber describes how the country’s traditional nesting dolls now bear images of celebrities like Bruce Springsteen or Madonna. It’s clear that Russia not only invites symbols of capitalism into the country but also blends and integrates American ideals of fame and fortune into its traditional culture. Even in countries once defined by socialism, globalization has enabled capitalism to win out.

This resource provides an overview of words and phrases that can help you signal a transition in your paper.

Each body paragraph in your paper should generally focus on one main idea, thoroughly and completely. As such, it is important to consider the order of your ideas and how they build off of or relate to one another, in service of your central argument. Effective transitions can better assist the reader in understanding how each paragraph connects to the one before it and the one after it.

This resource provides a table of transition words, organized by the function of the transition. To use this table effectively, select a moment in your paper where two paragraphs need a stronger transition between them. Then, identify the relationship between those paragraphs so that you can choose an appropriate transition word or phrase from the table below: